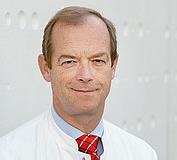 In 1996, Prof. Hallek became founder and chair of the German CLL Study Group. He is a member of the German National Academy of Sciences Leopoldina and has received numerous awards, including the Paul Martini Prize (2012), the Binet-Rai Medal (2013), the German Cancer Award (2017), and the European Hematology Association (EHA)’s José Carreras Award (2019). In 2018, he presented the Ham-Wasserman lecture for the American Society of Hematology (ASH).

Prof. Hallek was president of the German Society of Internal Medicine (DGIM) from 2014 to 2015 and chair of the German Society of Hematology and Medical Oncology (DGHO) from 2016 to 2019. He is the current chair of the Scientific Committee of the European School of Haematology in Paris, France, and a member of the Strategy Advisory Board “National Decade Against Cancer” of the Federal Ministry of Education and Research (BMBF). Since 2020, he has been the associate editor for the journal Blood.