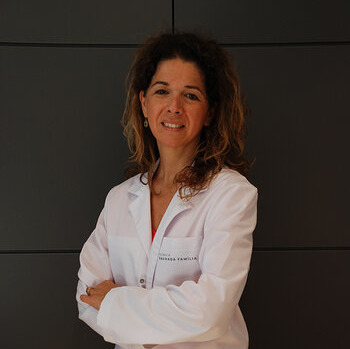 Carol Moreno is an associate professor of medicine at the Autonomous University of Barcelona and senior consultant hematologist in the Department of Hematology, Hospital de la Santa Creu i Sant Pau and the Sant Pau Biomedical Research Institute (IIB-Sant Pau) in Barcelona, Spain, where she leads the clinical and translational CLL program. She received her medical degree from the Universitat de Barcelona before she completed her PhD at the Institut d’Investigacions Biomèdiques August Pi I Sunyer (IDIBAPS) and her postdoctoral research at the Feinstein Institutes for Medical Research in New York City, NY, USA.

Prof. Moreno participates as a board member of the European Research Initiative on CLL (ERIC), the Spanish Group on Hematological Malignancies in the Elderly, and the European Hematology Association (EHA). She is a member of the Scientific Committee of the Josep Carreras Leukaemia Research Institute, and from 2014 to 2017, she was a member of the EHA Scientific Program Committee. Prof. Moreno researches the natural history of CLL,  autoimmune phenomena, and the characterization of residual leukemic cells. She is a coordinator of the CLL program and a principal investigator for many clinical trials.

Since 2014, Prof. Moreno has been an associate reviewer for the EHA. She has published over 70 peer-reviewed articles in a range of journals, including Blood, New England Journal of Medicine, Leukemia, and American Journal of Hematology.